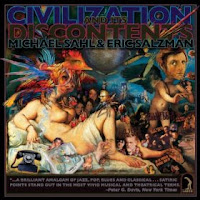 Dubbed "An Opera for Our Times," Michael Sahl and Eric Salzman's Civilization & Its Discontents (Labor 7089) had a popular run on NPR radio and was released originally on Nonesuch some time in the '80s.

Aside from the reference to Freud's monograph (which is not unrelated), it is a full-length cabaret-opera with lots of sung dialog on the empty club-hopping, networking, pre-Aids casual coupling, the empty life of vain striving for relational and occupational success that was a big part of the late '70s-early '80s.

As with Eric Salzman's earler Nude Paper Sermon it has lots of words and looks to encapsulate the social-cultural malaise of the times. Michael Sahl (known especially at the time for his "Mitsvah for the Dead") brings in his musical acuity.

The characters are lost in their abortive attempts to communicate, via telephone, live banter, bodily engagements and rebuffs in a world where Club Bide-a-wee forms the locus of their futility and the apartments where pickups end up willy-nilly to continue the unsatisfying cycle that brings them back again to the club for another go at it. As the MC suggests in the end, the club promises much but ends up functioning as a kind of dog pound for the stray humans who gravitate there.

Musically it's most definitely in the tongue-in-cheek club cabaret, Broadway emptiness pop-disco vein. And that fits the ambiance and thrust of the work. It was designed to be dated when it was made and it is dated now. But that is the point. The characters go through the motions, put on the clothes, dance to the music and have the casual attempts at sex like manikins in a department store window. Fashion soon makes them irrelevant and it's time to retool for the next wave of chic endeavor.

This is an opera-play-avant-musical where the music is secondary to the plot. It's most thoroughly worth hearing again today. The music is more incidental than it is central. But what is being portrayed still speaks today. So there you go. I am glad to have heard it.

Posted by Grego Applegate Edwards at 4:52 AM