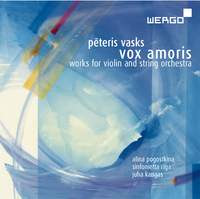 Peteris Vask, Latvian composer, has been forging an identity based on a mystical, lyrical diatonicism, a music both tender and perhaps world-worn, a contemporary music that, like Arvo Part's but in its own way, marks a return to the tonal roots of music over its long history, that manages at the same time to engage and transcend that history.

Those are the feelings and thoughts I have after a number of listens to his Vox Amoris, Works for Violin and Orchestra (Wergo 67502). The disk present three works written between 1996-2009. Each fits together with the others to form a kind of three-dimensional portrait of the composer and his present-day style.

"Vox Amoris," concerned with love and its transcendent powers, consists of long, flowing minor-diatonic lyric passages, an endless, heartrending melody where the strings set up a lush but luminous carpet for the singingly beautiful solo violin part. Like the other works on this disk, there is a neo/post romanticism at work that functions more as a soundscape than a linear symphonic discourse, again more in that sense like Part than, say, Sibelius.

"Tala Gaisma--Distant Light" is similar in mood and momentum with a feeling of time suspended, a soaring yet restrained violin expressivity and suspended clouds of minor-toned light in the string orchestra.

"Vientulais Engelis--Lonely Angel" brings the program to an end with the shortest work but perhaps the most beautiful violin expressions of all, against the backdrop of a hushed melancholy in the strings.

This isn't expressly happy music; it is deeply internal, a state of feelings that express themselves in intensely lyrical minor reflectiveness. Vasks's string writing is superbly wrought; both orchestra and soloist evoke an almost timeless weightlessness, a long and lingering kind of musical prayer.

It is excellently played by soloist Alina Pogostkina and the strings of Sinfonietta Riga under Juha Kangas.

Based on the music on this disk I would have to say that Peteris Vasks is a compositional voice to be heard, one of the more singular voices out there, a masterful crafter of sad, contemplative beauty. Recommended.