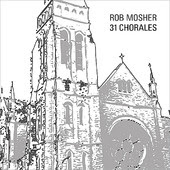 Composer-soprano saxophonist Rob Mosher commemorated his 31st birthday by writing 31 chorales in 31 days. They are loosely in the Bach mould. They have been recorded and released as, not surprisingly, 31 Chorales (self-released).

First, the instrumentation: it's unusual. It's Rob on soprano plus trumpet, bass clarinet and tuba. So you get the ranges you would expect from a four-part chorale, but the sound colors of the ensemble put it in an unusual aural context that is quite pleasant and interesting to the ears.

Second, the music: it's not rote Bach-a-naila. It's a little quirky. There are the 31 miniature chorales and five short chamber compositions. There is the healthy presence of the modern harmonic palette, enough that you know what year this is, plus a good bit of humor and lots of verve.

It's just different enough to be a very pleasant surprise. In the day-in, day-out reviewing of as many as 800 CDs every year, I need that. And if you are a dedicated listener to "serious" music, I would bet you need that too!