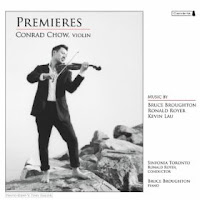 Chow has a sweet, pleasing, just slightly hollow tone for the lyrical passages. He generates great torque and excitement for the virtuoso fireworks that some of the movements contain.

To the music: Broughton combines neo-classicism in a post-Stravinsky mold, Scottish fiddle style and Prokofiev-ian drive and bittersweetness for his "Tryptich: Three Incongruities for Violin and Chamber Orchestra." The incongruities work together for a fascinating spin. You experience well put-together movements, each of which plays against the other while also playing on internal stylistic tensions within the movement to create vivid contrasts. In the process there is a connecting thread of linear thrust that unifies this very interesting work.

Royer's "Rhapsody" has a late-romantic, early-modernist lyrical liveliness that makes it something more than a hearkening back. His "In Memoriam J.S. Bach" returns the program to a neo-classical (neo-baroque) stance, with a slightly tart modern touch, passages in five and an otherwise updating and impressionistic treatment of the Master-as-inspiration.

"Joy" for Violin and String Orchestra introduces the music of Kevin Lau to us. Attractive, largo-esque lyricism is at play here for the short work. It has an earthy appeal but goes by all-too-quickly.

For the final works Chow and Broughton team up for some concluding contrasts. The pianist's "Gold Rush Songs" treat loosely, creatively and imaginatively three folk songs associated with the San Francisco area Gold Rush of the 1800's. The music has great charm. Finally as a bonus the two perform a violin-piano transcription of Chopin's "Nocturne" in C-Sharp Minor, which sounds quite lovely in their hands.

So there you have it. Conrad Chow is a voice of distinction, impeccable in technique and a most vivid painter of tone. He has a glorious sound and handles each of these works as if he was born to them.

The works themselves are very refreshing to hear. The roots of the classical and folk past undergo imaginative transformations, so that each work in its own way makes it all new. Each composer has a clear vision of how present and past can transform to a future of repeated pleasure for our appreciative ears. The Sinfonia sounds disciplined and well-disposed toward these works.