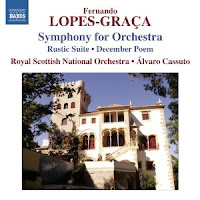 It is a bit of a commonplace to note how the golden age of mechanical reproduction, heralded by the advent of the LP in the '50s, ushered in a situation where the living room became co-equal partners with the concert hall in the introduction of new music. The LP allowed for a lengthy, sometimes difficult work, to be heard repeatedly with ease. Composers and works that might never had seen the light of day previously were now allowed to be heard by the enthusiast.

That brings us to the present, the digital age, where of course this process continues. Today's composer might not elsewise be heard by someone like me, here in the New York Metropolitan area. But now I can, for a small price, listen to Fernando Lopes-Graca's Symphony for Orchestra (Naxos 8.572892). And that is just what I have been doing.

Lopes-Graca (1908-1992) was one of Portugal's most productive composers and made his mark there. Over here we have heard less of him. The disk at hand provides an interesting and well-executed introduction to his orchestral works.

The Royal Scottish National Orchestra under Alvaro Cassuto leads us through spirited readings of four of his pieces, spanning the period of 1944 (the Symphony) through 1961 (December Poem). It gives us a chance to explore two sides of Lopes-Graca's style, the folk oriented "Suite Rustica No.1" (1950) and the more-or-less neo-classical/impressionist side in one his more well-known works, the aforementioned "Symphony for Orchestra".

Here is a composer well at home with the resources and colors available to him in the modern symphony orchestra. He is perhaps most notable on first hearing for his scoring and orchestration. It has great charm, clarity and color. Clearly he learned from the impressionists and those who came after.

The "Symphony for Orchestra" strikes me as the most memorable of the works presented here. It has a certain playfulness contrasted with a kind of refined majesty and excited turbulence. The "Suite Rustica No. 1" brings in the sounds of his native Portugal, somewhat in the way Ralph Vaughan Williams did for English folk. It is a symphonic treatment that transforms the material into a personal classical expression.

"December Poem" and "Festival March" are worth hearing and appreciating as well, especially the former for its further development of Lopes-Graca's style.

Maestro Cassuto brings out the color and nuance of the works; The Royal Scottish National Orchestra sounds both disciplined and inspired.

So here is your chance to hear an unfamiliar but quite reasonably captivating composer of the twentieth century at his best. He may not supplant Ravel or Stravinsky in your heart, but he will give you plenty to enjoy and savor on this disk.