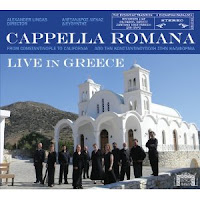 An unusual program of choral music from Byzantine Chant to contemporary Greek composers is on tap on Cappella Romana's Live in Greece (Capella Romana CR409).

Director Alexander Lingas takes listeners on a journey that begins with spirited renditions of the austere Byzantine Chant and various gems of Orthodox choral music through the 17th century. The group then performs some Greek Orthodox music from St. Sophia Cathedral, Los Angeles, where original choral music has flourished since Frank Desby founded a choral tradition in the beginnings of the last century. Finally contemporary Greek composer Michael Adamis gets some attention with several of his short sacred works, including the mystical "Radiant Cloud."

This is music of endless fascination, performed with impeccable attention to detail. Cappella Romana live up to their reputation as the foremost representatives of the Byzantine choral tradition.