Mercy and Grand, the Music of Tom Waits and Kathleen Brennan 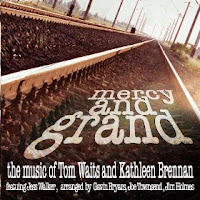 The rethinking of rock-folk art song in more or less classical settings has become a factor in today's music world. There have been such treatments of the music of Robert Wyatt, Renaissance settings of the songs of Nick Drake (see the May 15th posting on this blog) and now...Mercy and Grand: The Music of Tom Waits and Kathleen Brennan (GB Records BCGBCD18) arranged by Gavin Bryars, Joe Townsend and Jim Holmes, performed by the ensemble Opera North.

It's a musical conflagration that combines the folk-archaic qualities inherent in the accordion, winds, fiddle-violin and such with contemporary classical and rock touches. In the process the arrangements retain interest and set off the songs well. Mezzo-Soprano Jessica Walker holds forth throughout and her voice is dramatic and powerful. I'll admit it takes some getting used to hearing Tom Waits sung in her way, but once you erase expectations it increasingly works, or at least it has for me.

"September is reminding July, it's time to be saying goodbye."

A good selection of Waits-Brennan songs are complemented by a few very compatible songs by Kurt Weill, John Tams, and some old folk songs.

The mood can be dark and theater-of-the-absurd-like, socially critical, then comedic, world weary, snide and circus-like in turn, with moments of tenderness and vulnerability emerging from time to time as counter-realities. What matters is that the arrangements and Ms. Walker's voice come together to make a very fresh amalgam that grows on you the more you hear it.