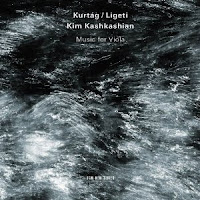 Unaccompanied solo string music is in many ways something normally seen as more for the cognoscenti than the average listener, especially when the music is modern. Now why is that? It's not a music of bells and whistles, by nature, excepting perhaps Paganini's unaccompanied violin works. It can be music of a high level of difficulty for the performer and it shows that performer in a bare spotlight, so to say. There is nothing inherently formidable from a listening standpoint, but the listener must accomodate his or her ears to the solo sound and ambiance.

These thoughts occur to me as I listen to Kim Kashkashian's Music for Viola (ECM New Series B0017196-02), a solo viola recital which is due to hit the streets on September 25th. It's two works of a singular focus: Gyorgy Kurtag's "Signs, Games and Messages" and Gyorgy Ligeti's "Sonata for Viola Solo."

This is music of a very serious sort. Both composers revel in the unique sound qualities of the instrument, and both seek to make a deeply concentrated series of melodic-harmonic poetics by getting inside the viola's voice as it were. Ligeti's work has a slightly more brilliant palette than Kurtag's. Both pieces work together to provide a kind of fit that contrasts nicely. Ligeti's is the more noteful and overtly expressionistic of the two works; Kurtag's the meditatively more profound, perhaps. It's exemplary high modernism of the later sort in both cases.

Kim Kashkashian brings out the essence of both works, which depends on alternations of sound and space in a way perfectly well suited for the ECM trademark sound. Every note most certainly counts in both cases and Kim gets a hard-edged yet exploratory tone that seems totally to fit the mood(s) of the music. Attention to detail makes all the difference here and her finely articulated variations in tone, attack and timbre bring out the nuance and subtlety of these works in brilliant ways. It's hard to imagine a better performance.

It is not light fare, to be sure. But the more you listen the more you appreciate Kashkashian's performance and the weighty quality of the compositions. Bravo! You can pre-order the CD at Amazon.