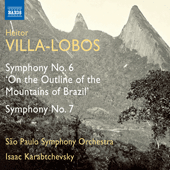 As many readers will affirm Heitor Villa-Lobos (1887-1959), Brazilian master composer, was a 100% original. His guitar music, his vocal music, his piano music, his orchestral works infuse a Brazilian sensibility into a limitless imagination. His orchestral music shows the sure hand of a brilliant orchestrator, a man of many timbres and colors, and a musical mind that conceived on a grand scale with great result, an original whose scores are nearly instantly recognizable as bearing his mark.

Today's CD shows all that quite well. It is the Sao Paulo Symphony Orchestra under Isaac Karabtchevsky rendering Villa-Lobos' middle-later-period symphonies: No. 6 "On the Outline of the Mountains of Brazil" (1944), and No. 7 (1945) (Naxos 8.573043).

The No. 6 as the title suggest paints a symphonic picture of the beautiful mountainous terrain of his homeland, as a kind of ebb and flow musical transformation of the mountains' peaks and declivities, and does so in vivid terms. No. 7 has a majestic, epic quality as well. Both are superior examples of the Villa-Lobos orchestral style.

In the hands of Karabtchevsky and the Sao Paulo organization the works come alive in full flower. The sound is excellent and the performances inspired. As a Villa-Lobos afficianado I treasure this disk, and the works (not previously familiar to me) as performed here. Villa-Lobos in the orchestral zone has a lushness that communicates a grand epic symphonically without falling into Romanticism. Instead he is modern-leaning--but in a very personal, Brazilian manner. These are worthy performances that bring out those qualities well. With the Naxos price tag they are a must for anyone wanting to come to know this music in particular and his music in general.