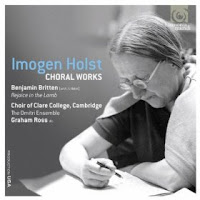 Imogen Holst (1907-1984)? Daughter of Gustav Holst. A composer in her own right. The new Choral Music of Imogen Holst (Harmonia Mundi) gives you a good sampling of her work in that mode. In the hands of the Choir of Clare College, Cambridge, Graham Ross conducting, we get a very sonorous idea of her compositions. The music ranges from the Mass of 1927 to more secular pieces, following her involvement with the choral style through 1972.

Throughout she comes through convincingly with the influence of Vaughan Williams (with whom she studied) and the modern English tradition in general (she was Benjamin Britten's assistant from 1954 to 1964) as starting points. There is counterpoint, drama and folk-based music, all given a nice twist in Ms. Holst's hands.

The set concludes with Benjamin Britten's "Rejoice of the Lamb," aka "Festival Cantata," which is a work I am not familiar with but goes well as a bookend to Imogen Holst's work and rounds out the program well.

Ms. Holst most certainly qualifies as a discovery. The music is quite beautiful. The Clare College Choir and the Dimitri Ensemble for instrumental parts do the music full justice. And thank you Musical Director Graham Ross for bringing this music to us so vividly. Anglophiles rejoice.