John Cage, As It Is, Alexei Lubimov, Natalia Pschenitschnikova 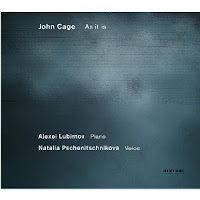 This month John Cage would have been 100 years old. There are celebrations of his music going on all over the world and new release are burgeoning in commemoration of the anniversary.

One of the more interesting is the release As It Is (ECM New Series B0017198-02) which will be out in the states this September 25th. It's Alexei Lubimov on piano and prepared piano, Natalia Pschenitschnikova on vocals for a program of some of the more intimate gems in Cage's oeuvre.

The artists have selected judiciously from Cage's body of music to come up with some of the more tonal, quasi-ethnic-folk-like ambient music for voice, prepared piano and piano, alone and in combination. It's Cage at his more directly accessible, much of it early, all of it pioneering.

Lubimov, Pschenitschnikova, and producer Manfred Eichner bring out the resonance of these miniatures in ways that stand out. Some have the quirky simplicity of Satie, the prepared piano pieces have a gamelan-like quality often remarked upon but brought to the fore in the ECM production style. Natalia's vocals emphasize the direct simplicity of the vocal lines. Alexei (who championed Cage's music as early as the '60s in his native Russia) brings out the exotic and enchanted qualities of the keyboard parts.

This is a great collection of Cage as a model of post-modern sensibility. It is not as concerned with the high modern works of his middle period. As a result it should form a wonderful introduction to Cage for those who have not yet accustomed themselves to the more abstract Cage.

It is a very well-performed collection of some of his most directly engaging music. And so it is very much recommended. You can pre-order the CD at Amazon for delivery later in the month.