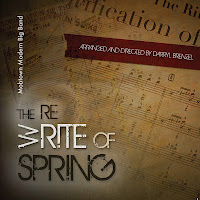 When Darryl Brenzel decided to arrange Stravinsky's The Rites of Spring for jazz big band, he committed himself to no easy undertaking. The orchestral score of course is complex in itself. How to get it into idiomatic big band form, get solo routine backdrops, get it to swing?

It called for no less than a rewrite of the entire score, and now we have it in our hands as a CD, The Re-(W)Rite of Spring (Innova 824). The Mobtown Modern Big Band realizes the new charts, no small feat, but it comes off well.

Of course The Rites of Spring is a seminal work of modernism. It has become an icon, a bellwether in the development of rhythmic and multi-melodic complexities in new music. To fiddle with an icon is potentially volatile business. What Darryl Brenzel has wrought may not appeal to everybody, in part due to the above factors. But there is no denying that he has succeeded on his own terms.

I find the funk-rock version of the final section a bit unconvincing. How to get it all to rock out and keep the rhythmic dynamic? He does not excatly go that route but rather more or less straightens out the kinks, and I think it's a pity he doesn't leave more of the asymmetry. But that is my own personal quibble and it is overshadowed by the overall impact, which is very strong.

So he sometimes simplifies the rhythms to get it all to swing, he adds transitional passages not a part of the original score, he writes idiomatic big band figures as backdrops to soloing routines, all with the idea of getting this into big band stylistic shape. One might quibble with what he does or how he does it. But taken as a whole he succeeds in getting the essence of the work to fly as big band music, and that is quite an accomplishment.

The band sounds great. If you meet this music half-way, you'll find much to savor. Brenzel has taken on a Herculean task and made it all work. It is something you should hear whether you come out of the jazz camp, the modern classical camp, or like me, you straddle the fence and appreciate what's good out there irrespective of labels.