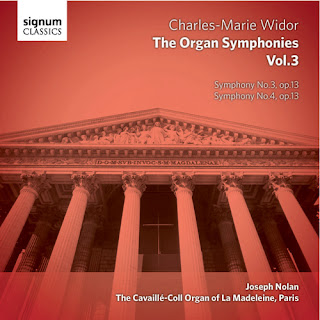 Before the coming of Jimi Hendrix, The Jefferson Airplane, metal bands and those stacks of Marshalls, there was loud music to be heard. The military bands of the Ottoman Empire must have been quite noisy, though I don't know much about them; there were the monster concerts of Berlioz and of course Mahler's "Symphony of a Thousand," with hundreds of orchestral musicians and singers holding forth. All of these projected a good deal of sound, and still do when you hear them in their full setting. Still further, at least from the time of Bach on, there was the modern cathedral organ. Their full set of pipes and stops, and the cavernous space they were situated in, gave the various shades of fortissimos called for a huge impact. Instruments made from at least the 18th century on were even more capable of untrammeled power, as we can hear today.

There may be no louder music (and softer for that matter) for such an organ than the Organ Symphonies of Charles-Marie Widor (1844-1937). He was one of the finest of the French Organ School, writing complexely dramatic, dynamic organ symphonies (ten in all) that excel in the structured long-form and provide both player and listener with much to explore, most all of it monumental in every sense of the term.

Organist Joseph Nolan has taken up the gauntlet of recording all ten symphonies. His latest in the series, Volume 3 (Signum Classics 334) recorded on the beautifully Gothic 18th-Century Cavaille-Coll Organ of La Madeleine, Paris, includes Widor's Symphony No. 3 in E Minor, op. 13, and his Symphony No. 4 in F Minor, also part of op. 13, both published in 1872.

They are sprawling works typical of the master, with both mysterious and grandly overpowering movements and everything in between. Joseph Nolan plays them with great elan and the sound of the CD triumphs from the passages that whisper to those that roar. This is music made for the CD--LPs always had a little trouble getting the dynamics together and if the recording was pressed masterfully, there was always the limitations of your cartridge to worry about. No longer! This digital record is exemplary in the huge range it projects onto your soundstage at home.

The symphonies themselves, Joseph Nolan's performances, the organ and the recording all work together to triumph. Charles-Marie Widor would have approved! Here is one to get!