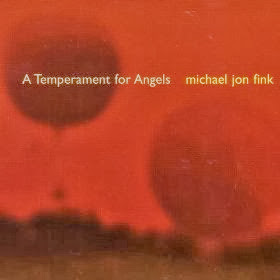 There is no one way. There are many ways. If we didn't know that at some point in terms of modern concert music, we most certainly do now. Michael Jon Fink gives us a way in his half-hour work for sustained strings/samplers, A Temperament for Angels (Cold Blue 0017). It's another evocative work in the realm of post-minimalism/radical tonality.

Fink builds an ambient world of gradually evolving harmonic blocks, using multi-tracked violas, cellos, digital sampling (sounds like mainly of the strings) and mallet-sustained cymbals. It results in a soundscape that builds and shifts in harmonic content over time, then decrescendos in the end to poignant silence.

It is of a piece with many of the Cold Blue single releases in its singular devotion to tonal atmospherics. And so it too has a definite appeal and impact on the listener in the way it constructs a slow moving, ever-changing, ever-present musical world of its very own.

This may not be the first Cold Blue album to get. I reviewed some others over the last six months and one or two of those might best come first, but A Temperament for Angels has a Zen kind of focus on the nature of complex tone clusters that has genuine merit and holds up well after many listens. Nice!