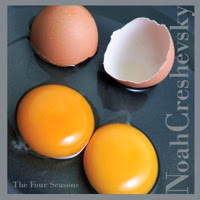 Anyone who listens to music of almost any stripe today knows (if they have some historic breadth in their background) how radically transformed recorded music can be thanks to the digital platform. It has especially been a fortunate development in the "serious" electronic and electro-acoustic music genres. The technology behind the present-day creation, sampling and juxtaposition of sounds allows combinations that once were virtually impossible or so daunting that they were not often attempted on any complex level.

Just because the means have become available in a more readily manipulated way, of course, does not mean that everything folks attempt is that much more advanced and intrinsically valuable from a musical point of view. But if the composer's imaginative, creative, whole-picture sense is vivid, the results can be pretty amazing.

That is true of Noah Creshevsky, especially in his recently released opus, The Four Seasons (Tzadik 8097). Here we have a major full-lengthed electro-acoustic/electronic work that he conceived of as a sort of retrospective to what he's been doing from 1992 on. The idea is that through sampling and digital reconstruction of all manner of instruments and singers, in the most global sense, he can create a work of sometimes neo-orchestral density in music of a fascinating super-organic nature. This is music that sounds live but puts together contrasts and physically impossible playing situations. It's a music of a virtual large ensemble of supermen (and superwomen), doing things that no real-time situation could ever allow.

In some ways there are roots in the electro-acoustic music of Frank Zappa and Pierre Boulez. Or to be more precise, The Four Seasons shares similar musical objectives/traits with some of the works of these forebears and brings things even further along. Hyper-complex counterpoint and an ultra-pointillistically utilized palette of diverse and radically conjoined note making or speech uttering (in the case of some of the vocal sounds)--all form the raw material for his ambitious compositional vision.

Creshevsky often thinks in terms of style clusters, as with sections constructed of moments of what sound like traditional Japanese, klezmer or modern concert music, or for that matter, any combinations that suit him for that particular moment in the work. They are pieced together with considerable creative musical insight to meld an ultra-modern supermusic.

It works because Creshevsky is the real musical deal, a visionary of the new possibilities in digital collage, if you will. The Four Seasons is Creshevsky triumphant, one of the most captivating examples of electronic/electro-acoustic music you can hear today--exhilarating and absorbing, almost incredibly so.