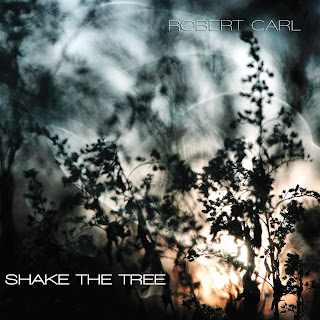 I've found that high modernist abstractions and the pianoforte go especially well together. Perhaps it has something to do with my appreciation of how hard the music can be to play properly on that instrument. Needless to say it requires musicianship and an understanding of the thrust of the work that goes far beyond "Chopsticks!"

Partly for that reason I really appreciate the performances on Robert Carl's collection of works for the piano entitled Shake the Tree (Innova 857). The disk features three Carl works: "Shake the Tree" (2005) for piano four-hands, "Braided Bagatelles" (2001-2) and "Piano Sonata No. 1 'The Big Room'" (1993-99), the latter two for solo piano. Pianists involved are Donald Berman and John McDonald for the four-handed work, then Moritz Eggert and Erberk Eryilmaz for the succeeding works, respectively.

All four artists give the Robert Carl compositions a lively realization. The works themselves have the expansive chromaticism and pan-tonality of the contemporary and a kind of discursive logic that has an almost narrative quality. They have a complexity that takes them into the realms of the advanced yet somehow all seems clear and readily comprehensible to the attentive listener.

There is little of the sort of open, continuous pointilism of a Boulez. The abstract phrasings speak in varied ways, interconnecting. Carl, born in 1954, studied with Rochberg, Xenakis and Ralph Shapey, and some of that comes through, along with the sort of Ives-Ruggles open-to-the-new, try-anything freshness that characterizes the American avant garde at its best.

Robert Carl has an affinity for the piano. That is clear. His compositions come across as highly invigorating, smart, devoid of mannerism or cliche. They are well-realized by the pianists involved. It is a treat to hear it all. Recommended.