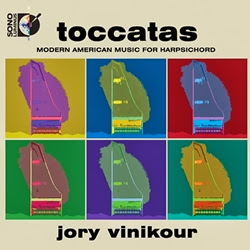 If there are trends lately in the world of modern classical, surely one of them is "the old in the new." Anybody reading this blog regularly will note the releases that somehow have brought earlier styles into conjunction with new music. And I cover older styles, too, at any rate because they do not remain static in the performance arena and they are part of the rootedness of where we are today.

So the release up for scrutiny happens to fit in with all this nicely, and yet is rather unusual in that it is something you don't see that much. I refer to the recording of modern American harpsichord music as performed by Jory Vinikour (who also was on the Jose Lemos recording reviewed the other day) entitled Toccatas (Sono Luminus 92174).

The works fill a rather wide period between 1953 and 2012. They all share in common a modernist harmonic-melodic sensibility along with a referential backward look at the music composed for the harpsichord in the instrument's heyday, namely the baroque. We have represented on this anthology well-known modernist composers who came into notice especially in the '50s and '60s or even earlier: Mel Powell, Samuel Adler, Henry Cowell; and then practitioners who are getting recognition now but perhaps are not as well known: Robert Muczynski, Thomas Benjamin, Robert Moevs, Stephen Blumberg, Patricia Morehead, Harold Meltzer.

We get an hour of music that represents the musical outlook of today but respects the harpsichord toccata tradition with fugal, contrapuntal and rhythmic patterns that reflect the past, along with the sort of virtuoso, expressive, sometimes rubato, semi-improvised feelings one often gets in a traditional toccata from the earlier period.

Jory Vinikour plays it all well, with sensitive attention to how the old and new conjoin in each case.

As with many Sono Luminus releases this one comes with the standard stereo mix on a CD and a 5:1 surround sound mix on Blue-ray disk.

The results are fascinating and endlessly listenable. This is unusual fare but it will bring to you music you will probably not hear otherwise, things to stimulate your auditory channels in the best way. And Jory Vinikour performs them all with real panache.