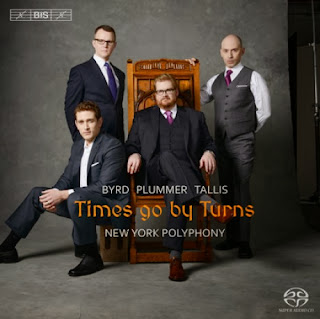 Examples of "early" and "late (modern)" styles intermingling got off to a pretty auspicious start (in my own youthful listening days) with Stravinsky's "Monumentum pro Gesualdo" (1960), which featured a rearrangement of a Gesualdo madrigal. The album release at the time included fine examples of Gesualdo's vocal music along with the Stravinsky work. It gave us all something to think about, at least those who listened closely.

Time has marched forward and of course composers like Arvo Paert have captured the enthusiasm of audiences over the world with an early-music-influenced modernity.

A new release continues that trend with a well-conceived collection of Renaissance and early-music influenced modern acapella vocal works. New York Polyphony is the group behind it all, a four-man countertenor, tenor, baritone and bass confluence that performs the music with beauty, preciseness and a haunting expressivity. The album is called Times Go By Turns (BIS 2037).

The works are well chosen. William Byrd's beautifully wrought "Mass for Four Voices" rubs shoulders with Thomas Tallis's four-voice mass and John Plummer's (1410-83) "Missa sine nomine." Aside from the wonderful performances, that would be somewhat unremarkable if it weren't for the interspersion of three parallel works from our era, Richard Rodney Bennett's "A Colloquy with God," Andrew Smith's "Kyrie" and Gabriel Jackson's "Ite missa est." The modern contributions are short works but nonetheless come as a refreshing breeze of the present, in an early style yet filled with the presence of the wider harmonic and/or rhythmic world we now mostly occupy, along with (in the case of the Smith work) an archaism that comes alive via the hindsight of the present.

The end effect is rather magical. Hearing the early masses with a single singer for each part, the exotic timbre of countertenor (well represented in the person of Geoffrey Williams), and the lucid clarity of the contrapuntal mastercraft as performed in this manner bring you to a new awareness. Then the alternation with modern works increases the feeling that you are dwelling in unearthly musical worlds.

It is a testament to the great talent and aural sublimity of New York Polyphony. It is music that grabs you from the beginning and does not let go until the last of it. It is a sonic adventure of the first rank. Recommended!