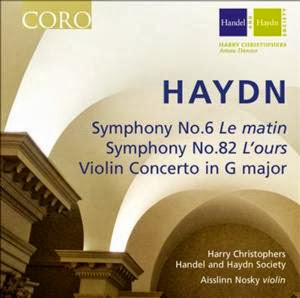 Most of us know that the classical era per se, via the Mannheim School, did the most to establish the modern symphony orchestra and the symphony as a more or less standardized form, with a movement structure that carried through (with variations) at least through the initial romantic era and beyond. Josef Haydn did as much or more than anybody to leave us with a body of works (more than 100) of lasting excellence and paradigm-making importance in the classical-era symphonic realm.

The Handel and Haydn Society go way back, having been founded in 1815. In the fifties of last century they did valuable work making some of the then lesser-known symphonies of Haydn available on LP in respectable versions. I still have a few from those days. They continue the good work today, sounding better than ever.

The latest CD is a live recording of the orchestra conducted quite ably now by Harry Christophers in performances of Haydn's Symphony No. 6 "Le Matin", Symphony No. 82 "L'ours" and the Violin Concerto in G major (CORO 16113). These are versions that are more period-specific than the typical recordings made with larger orchestras in more-or-less Beethovenized performances, something one found a great deal of in my youthful LP days. It still can be the case but assuredly not with the Handel and Haydn Society, not here.

But that is not to say the the music is then somehow less spectacular, exciting or moving. In Harry Christophers and the orchestra's hands they are beautifully lively, filled with momentum, transparent in the balance of parts, filled with life.

Aisslinn Nosky steps forward from the orchestra for the Concerto (she is otherwise the concertmaster), and sounds very good indeed.

All three works are classic Haydn. "Le Matin" has virtuoso part writing and an almost chamber intimacy. I have not heard a more idiomatic version. It convinces where some others sound tentative or even peremptory. This version is more playful and lilting than those I have known. "L'ours" is among the most popular of his pre-late period symphonies and justifiably so. The "dancing bear" movement is handled with just the right amount of spirit and humor by the orchestra; the rest of the movements sparkle with old-world folk qualities in Christopher's hands. Haydn both shines as a brilliant original but also reflects for us with the full man-of-his-times storytelling folk aspect of his music. The Violin Concerto comes off with authentic charm and brilliance as well.

In short this is a marvelous volume of Haydn: three masterworks played in a manner that does perfect justice to the venerable master. He no doubt would have enjoyed the performances.

Email ThisBlogThis!Share to TwitterShare to FacebookShare to Pinterest
Labels: classical era symphonic masterpieces by haydn, harry christophers and the handel and haydn society play haydn's symphony no 6 no 82 and the violin concerto in g major gapplegate classical-modern review