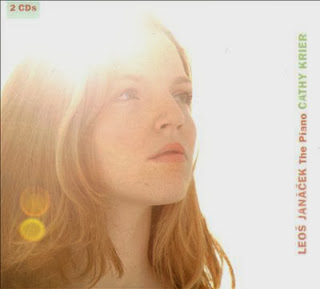 Some composers fit readily in some sequential chronology. Leos Janacek does not. He was neither exactly a romantic, a modernist in some consistently forward looking way or a nationalist. That he partook of all three stylistic tendencies yet belonged to none is part of what makes him stand out in retrospect. He went his own way and created a body of music like none other, really.

He wrote some wonderful music for the piano. Cathy Krier, a rather young (b 1985) Luxembourgian pianist has recorded most of it, and we can hear her interpretations in the two-CD set Leos Janacek, The Piano (Avi-Music 8553290).

Two things strike me about her versions. One is that she approaches the more dynamic, hammer-like forcefulness of some of his passages with less of a Gyorgy Sandor sort of near-violent attack than some versions I have heard. Now that's not a bad thing. She's just a bit more gentle in her concept of it all and perhaps all the more musical for it. Is it a gender thing? I don't think necessarily so. But it does define how Ms. Krier approaches it all. It makes for a less histrionic, perhaps a less romantic interpretation than the way the 20th century performer generally approached his music, also perhaps less idiomatically Eastern European? But then this is a more intimate Janacek, less a concerted set of applause-inducing fireworks, which was certainly not what Janacek intended in any event. This is just me giving you an impression. And it's a defining nicety of it all to me.

The second thing that hit me was the sometimes more jagged, asymmetrical, less flowingly smooth nature of some of her rubatos. Again, this perhaps comes out of her less romantic, more singular vision of what the music should sound like. It sounds right for Janacek. It sounds contemporary.

Think of these two traits as what makes Cathy Krier distinctive. After hearing this set a number of times I came to appreciate her versions all the more. And of course there is much more to the music and her performances than these two aspects. She can bring out the sensitively pianissimo aspects of Janacek as well or better than anyone. And the music has a lyrical yet forceful charge in her hands that makes it all speak.

There is a great deal of fantastic music to be heard here. The Sonata, "On an Overgrown Path," "In the Mists,"--and some of the more obscure works are fascinating, too, such as the "Miniatures (1877-1927)."

So all-in-all I must say that this set is wonderful to have both for the solid blast of pianistic Janacek it contains and Ms. Krier's very own way with it. A pianist of original and ultra-musical stature, a composer of genius. That's a potent combination!