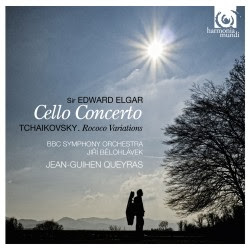 The Puritans and then the Victorians tended to be suspicious of music. Anything that involved a public expression of feelings (especially for the Puritans and other fundamentalists, expressions of feelings outside the religious sphere) was not encouraged. Perhaps because of this for a time England produced no composers of lasting merit. Edward Elgar in the past has sometimes been labelled a stuffy Victorian. In reality he was the father of a new English Renaissance in musical composition, a liberator, the man who broke through from the waning Victorian world to produce a worthy body of music which on the whole was anything but stuffy.

And today we have a new recording of his Cello Concerto, op 85 (Harmonia Mundi 902148) along with Tchaikovsky's Variations on a Rococo Theme, op 33 and Dvorak's Klid (Silent Woods), op 68/5. Jean-Guihen Queyras is the center of the program, a cellist who seems very right for these works. Jirí Belohlávek ably conducts the BBC Symphony Orchestral with a flowing interpretation of the orchestral parts.

These are works of late romantic passion. But what do they have in common? The cellist sees "a fascinating mirror effect," on the works taken as a whole, with each composer "playing on contrasts to elucidate his intentions".

I find that response fascinating, though I must say it will take another listen with that in mind to understand how that works out in the scores. Be that as it may the three works together form a wonderful platform for Queyras the master cellist. They are each wonderfully expressive and he brings out the respective musical arcs of each work with a good deal of poise and artistry.

Both the Dvorak and Tchaikovsky act as counters to the psychological introspective-elegiac aspects of Elgar's work. They put the forward motion in the program; Elgar's work looks backward regretfully with a relish of remembrance. In purely musical terms it makes of the cello part the narrator of the nonverbal tale of an inexpressible loss, the orchestra a kind of Greek chorus that reacts in sympathetic ways.

It is surely one of Elgar's masterpieces. When coupled with the Dvorak and Tchaikovsky it is a very attractive, beautifully detailed set of performances that work together well. Queyras, Belohlávek and the BBC Symphony come through nicely with well-balanced, meticulous yet impassioned interpretations. Recommended.