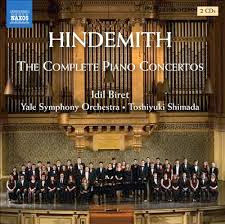 Paul Hindemith (1895-1963) occupied an important middle-ground among composers of the modern stamp. He early on shed romantic excess for his own brand of neo-classicism, writing spirited works with a logical unfolding and a totally personal harmonic-melodic approach that extended tonality to suit his own expressivity and pushed it at times to its very limits. A contrapuntal weave of voices and forward momentum rhythmically were very much a part of his style.

Pianist Idil Biret and the Yale Symphony Orchestra under Toshiyuki Shimada give us (in two CDs) The Compete Piano Concertos (Naxos 8.573201-02) of Hindemith. Five complete works in all are involved, ranging from the 1923 Piano Music with Orchestra (for Piano Left Hand), op 29, the 1924 Chamber Music No. 2 for Piano, Quartet and Brass, op. 36, No. 1, the 1930 Concert Music for Piano, Brass and Two Harps, op 49, Theme with Four Variations (The Four Temperaments) for Piano and Strings (1940), and the Concerto for Piano and Orchestra (1945).

All of these works are first-rate Hindemith, though they do not always have a super-virtuoso piano part. The writing for the piano is intricate and totally idiomatic throughout, however, and Idil Biret is an ideal exponent. A big surprise is the undergraduate Yale Symphony Orchestra under Shimada. They play their parts as if they were born to them, with the needed elan that a Hindemith performance stands or falls upon. Their youthful zeal comes through wonderfully. Clearly they are confirmed Hindemithians! Of course Hindemith taught at Yale when he managed to escape from the Nazi regime and became an important figure in the American musico-cultural life. So the orchestra plays the music rightfully as something that forms a part of their heritage.

Perhaps the biggest surprise of all is the Piano Music with Orchestra (for Piano Left Hand) which was commissioned by pianist Paul Wittgenstein, a virtuoso of note who had lost his right arm in WWI. The Hindemith piece was a part of his attempt to resume his career, then as a left-handed only pianist. He also commissioned Ravel to write a concerto, which has been well-established in the repertory for many years. The Prokofiev and Hindemith works Wittgenstein ordered were not to his liking, so they essentially sat in limbo, unperformed. The Hindemith work was only discovered in 2001 on the death of Wittgenstein's widow, so it is something new to me (and no doubt many others), a beautiful work.

Then too all of this is excellent, a righteous melding of the right scores with the right performers. It is a treasure-trove of Hindemith at his best, something someone new to the composer will find an excellent introduction, and the confirmed Hindemithian will greet with no small amount of joy. That's how I feel.