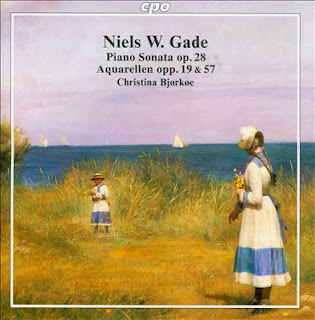 There are composers that at least Stateside many have heard little of. We don't always have the chance to hear them. They are names whose music remains hidden to us unless we take the trouble to search out the releases. Niels W. Gade (1817-1890), Danish romantic, would qualify as one of them. In his lifetime he was well admired by the likes of such luminaries as Mendelssohn and the Schumanns. He is a musical voice that's surely worth our scrutiny. But not often heard here these days.

Christina Bjorkoe has recently released a disk of his solo Piano Works (CPO 777 628-2) that helps us flesh out the composer's more intimate side. (There are also symphonies, concertos and etc., but another time for that.) The disk contains beautifully sympathetic performances of two major Gade works, his "Piano Sonata" op. 28 and the "Aquarellen" opp. 19 & 57. The latter come to us in the form of 15 short movements written over a number of years.

Both works have a singingly inventive quality that sparkles with originality and warmth. Ms. Bjorkoe brings to the music a pristine touch, excellent technique and a sense of phrasing that teases out the lyrical clarity in all its complexity.

These are piano works as fine as virtually anything written in the era. And we have a chance to hear them now with performances that shine with the sunlight they contain in abundance. Listen to this one by all means!