Daniel Lentz, On the Leopard Altar 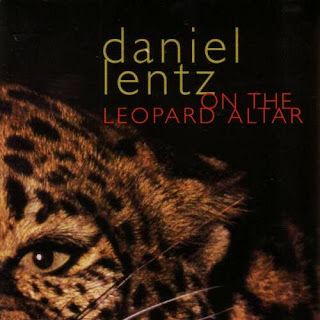 Minimalism proper, that form which creates regular patterns to repeat with overlays of changing music and/or shifts in the pattern itself, is still very much with us. Daniel Lentz, one of the better known of the lesser known composers, gives us a good, varied look at his music in On the Leopard Altar (Cold Blue 0022).

To be hair splitting, only the first and fourth piece of the five have overt minimalist qualities. "Is it Love" creates out of keys and a small vocal ensemble a fascinating mix. The keys play a series of patterns in a constant interplay of continuously sounded staccato eighth notes. The vocalists form a choir of ever differing staccato patterns through a process of subtraction (according to the liners) produced in hocket style. "Wolf is Dead" has a similar trajectory, but the vocal parts are less dense and hocket less used in favor of at times a contrapuntal approach. It may not perhaps be as striking as the first piece, but has much about it that keeps the attention focused.

"Lascaux" is to me the most interesting of the more soundscaped works included here. It uses wineglasses and keyboards to create a very beautiful panorama that shimmers with overtones like ever reverberating bells in a dream. "On the Leopard Altar" has a singular vocal line sung by first one soprano, then several to the accompaniment of keys. This one too has a dreamy sound but with more of a leider quality to it. There is a very lyrical side to Lentz when he wants to go that way and this is a great example.

The final, short "Requiem" work combines bell-like sounds with a vocal part that sounds as if a single voice is singing in the middle of a great cathedral and you the listener are experiencing the sound of the voice and the resonance of the cathedral in equal proportions.

So Daniel Lentz gives us two pattern pieces and three pieces more in the through composed, soundscaped, radical tonality vein. Those latter three have great lyrical beauty. The pattern pieces remind us that Lentz makes his own way through the Reich-Glass influence so prevalent in the minimalist genre and sounds out a personal path with its own route through the thickets.

It's a captivating set of pieces that I certainly find of real interest. You may gravitate to them as well. You get a series of spaces to dwell in for a time, relaxing and giving lyrical pleasure. Recommended.