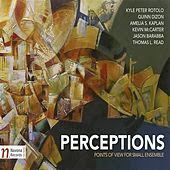 Modern chamber music is something that tends to please by most being itself. Partially because of the way larger ensemble concert situations favor the peppering of modern works throughout the course of a subscription season, whereas chamber ensembles can assume a more discerning audience and may offer the modern in more concentrated form, modern chamber music works can tend to cluster together in larger blocks in the concert situation. That is just an impression, but I do believe the chamber music audience has more committed listeners as their average gathering, so programmers-ensembles can assume they will be more exploratory by nature, more open to the new.

And with that in mind the modern chamber anthology Perceptions: Points of View for Small Ensemble (Navona 5909) can be understood as appealing to such an audience by giving them a goodly portion of the new. In it we hear six works by six less-known but none-the-less competent composers. Each has a modern or a post-modern point of view of their own and brings it out in creative ways.

Kevin McCarter's work, "Above the Clouds" for violin and piano, has a rhapsodic tonal quality that is enchanting. The other composers either stay in an expanded tonality/ modern zone or flirt with post-modern tonality and engage it as a contrast to the more expanded style. Understandably the shadings of sound color tend to be more pastel and brilliant than charcoal grey, fitting the style.

The totality of the anthology and the diverse group of composers go together certainly in their well-crafted, adventuresome approaches. None of the works are quite avant garde so much as they build inside a tradition of modern 20th century American music, never overtly conservative nor overtly groundbreaking so much as concerned with expression, dynamics, and a lingering lyrical quality at times.

In the end we get a very engaging program of music that does not condescend and reveals itself with a proper number of listens. It's all quite good and the performances live up to the promise of the compositions. Recommended.