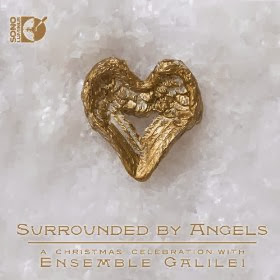 The holidays, Christmas, things that make children glow. If you as an adult have an increasing aversion to the cheap tinsel, Black Friday insanities, the impossible expectations that both Madison Avenue and some of the more over-the-top secular carols have made on your feeling of good times, there are remedies. One is in the music you might wish to play during those times. I personally gravitate to the very old music, because much of it is really stunning, and the schlock sorts of things can get on my nerves very quickly.

There is a new album of music out by Ensemble Galilei, a group that straddles a line between quasi-early music style and quasi-folk from Irish to Americana. The album is called Surrounded by Angels (Sono Luminus 92173) and comes in a two-disk set--a regular CD with stereo mixes and a Blue-ray disk with 5:1 surround.

The musical selection is great. They go for some of the arcane classics and a few indispensable less old but no less evocative carols. So you do get "Silent Night," but you also get "What Child is This (Greensleeves)", an old Irish favorite of mine, the "Wexford Carol", and things associated with folk strains, like "Brightest and Best" and "I Wonder as I Wander".

The song choice is refreshing and the ensemble does them a real favor with early/folk arrangements that use a harp, a pennywhistle or a recorder, violin-fiddle, even a banjo for one or two.

The arrangements and performances are enchanting. There are jigs, there is plainsong done instrumentally, there are no vocals and so you can revel in the sound of the arrangements and the wonderful carols without having to worry about just what it all exactly means. I find the disk a true delight.

Here's a way to rid yourself of the commercial blues and experience some kind of more down-to-earth hookup with the old traditional music. It's surely going to get you feeling well around Christmastime and the holidays, I would think. It's good enough that I have listened a bunch of times early in the season now and I never got that "no, please, not again, not this early" feeling. It's that good.