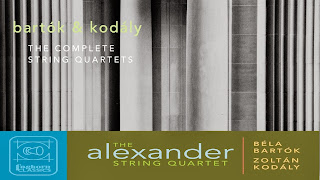 There is no doubt in my mind; the Alexander String Quartet is a crack outfit. Their Bartok & Kodaly, The Complete String Quartets, a 3-CD set (Foghorn Classics 2009), makes that clear.

Now of course Bartok's quartets are just about universally considered among the very best, the most involved string quartets in the literature. Along with Beethoven's late quartets and the quartets of Elliot Carter they give us a rare realm of pure music at a level that is rarely reached by anybody. Yet when Bartok first came to America his music wasn't all that well-known. Zoltan Kodaly, fellow Hungarian and associate, was perhaps even lesser known here. All that has changed of course. Kodaly's two quartets may not quite have the sublimity of Bartok's, but they are by no means out of place alongside Bela's masterpieces.

So it is nice to have them all on one three-disk set. More than nice, though, because they are excellent performances. I must say I am not very familiar with the Kodaly works (until now) but the Bartok quartets I have listened to all my adult life. I had various versions beginning in music school, but I ended up with the complete opus on LP as played by the Julliard Quartet. The works are complicated enough that it takes many listens to fully absorb the intricacies. The Julliard group did a fine job with them, but sometimes they seemed almost too brio, possessed.

The Alexander Quartet sustains a fine balance between brio and intelligibility, and perhaps also in part because I listened intently again after a few years in between, but after hearing the Alexander versions a number of times I feel that the prosaic-poetic fluidity that may have evaded my musical ear has come together at last. These are not simple works. By now well into the new Millennium, both performers and listeners have grown up with the music and can make better sense of it than when the corpus was still so new. So my ears may be growing as are those who tackle the set for themselves, but also I think it's clear that the Alexander Quartet really understand the works and phrase them all in terms of the inner musical logic, in part because by now the modern idiom is no longer only semi-comprehensible when operating at such a high level, but also that the Alexander Quartet have really gotten inside the works and by now for them they seem like an extension of self, second nature.

At any rate that's how good these performances are. The Alexander Quartet make the Bartok cycle seem inevitable, natural. That is saying something. They have great spirit in the performance of all these works. But the Bartok especially is as good as it gets. I don't imagine I need say any more. These are outstanding versions, centerpieces of any modern quartet collection.