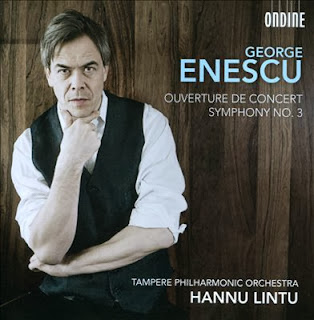 Like many of my generation I first encountered the music of George Enescu (1881-1955) on Ravi Shankar and Yehudi Menuhin's ground-breaking original East Meets West in 1966. One side had Shankar compositions, the other a sonata for violin and piano by Enescu. From then on I was interested in whatever Enescu had done. I've picked some nice things up on my way through life but never the program just made available as performed by conductor Hannu Lintu and the Tampere Philharmonic Orchestra, namely Enescu's Ouverture de Concert and his Symphony No. 3 (Ondine 1197-2).

This one brings us to an Enescu we (or rather I) knew little about--the later, evolved composer for orchestra. Both works have much to offer the attentive listener. The "Ouverture de concert sur des themes dans le caractere populaire roumain," op. 32, as the title makes clear, brings us to Romanian folk territory, but of course not in some unmediated way, but rather with all the compositional syntheses and developments one might expect from the composer. It is short, over all-too-soon within ten minutes.

We are compensated by the lengthy and accomplished "Symphony No. 3," op. 21. As the liner notes suggest clearly, Enescu experiments with musical structure by combining sonata form with endless transformations-variations on specific thematic elements. I don't suspect the ordinary listening ear picks up on this technique while experiencing the symphony as it unravels, unless one knows to watch for the developments, score-in-hand. But it is as a building that contains supports. You don't have to know where the supports are to appreciate the building's beauty. I didn't experience it in my listening anyway, except to feel like the music was springing from an endless font of invention. This I am sure was as the composer wished.

It is a work of a ravishing sort, not especially Romanian sounding as much as universally expressive, a heightened, well-woven, late romantic work of great character.

Hannu Lintu (who we encountered yesterday on his Ligeti disk) conducts the Tampere Philharmonic with excellent results for both works. Anyone with an interest in Romanian/Eastern European symphonists should not miss it. But it will sound well no matter what your background, I should think. This is a side of Enescu that should not be missed.