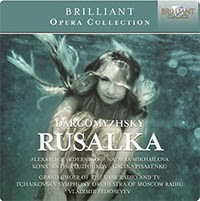 None but the most pronounced of Russophiles here in the States are likely to know composer Alexander Dargomyzhsky (1813-1869) and his opera Rusalka (Brilliant Classics 2CD 94718). That is now easily remedied with the release of a budget-priced 2-CD of the opera with Vladimir Fedoseyev conducting the Grand Choir of the USSR Radio and TV and the Tchaikovsky Symphony Orchestra of Moscow Radio. Judging from its provence this must have been a Melodiya boxed set at one point. The soloists are Alexander Vedernikov, Natalia Mikhailova, Konstantin Pluzhnikov and Galina Pisarenko. The bass of Vedernikov as the Miller is especially good. Chaliapin he is not quite but he is nonetheless wonderful in his dramatically expressive portrayal.

The libretto is based on a poem by Pushkin. It's all about the love between a Prince and a Miller's daughter, which in the class system of the time could not be. The Prince marries another more suited to his station, regrets it and in the end drowns in his attempt to find his beloved who has turned to a mermaid.

The Brilliant set does not include a full libretto, which is a shame, but the music is so good that one overlooks it after a spin or two. Dargomyzhsky is a cross between a kind of Russian Rossini and a precursor to Mussorgsky in the lyrical and melodic memorability of the music and its sometimes folksy quality.

The performances excellent, the sound very good and the music a real find for those like me who had not heard the opera previously. If you follow the history of the Russian classical style this one is hands-down a must.