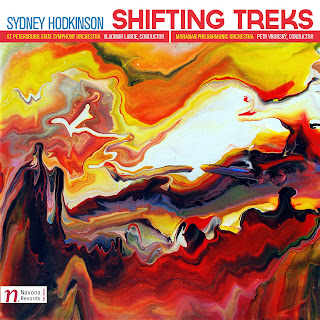 Now I have the feeling I've encountered composer Sydney Hodkinson before, but if so I cannot recall where. He has written over 250 works. Carter, Sessions, Britten, and Finney according to the press sheet are some of his major influences. He taught at Eastman where he was the director of Musica Nova, and otherwise seems to have been pretty ubiquitous out there.

The new release of three of his large-scale orchestral works, Shifting Treks (Navona 5922), makes it clear that Hodkinson is a mature voice of very real distinction, a modernist who by this point follows his own muse. Of the three works two are performed by the St. Petersburg State Symphony Orchestra under Vladimir Lande, the title work by the Moravian Philharmonic under Petr Vronsky. Both orchestras sound very good and give us readings of Hodkinson's music that provide all the fullness and impact needed to do him justice.

The three works cover a variety of moods with a vivid orchestrational flair. "Epitaphion" has an elegiac mysteriousness. "Potpourri: 11 Very Short Works" runs the gamut from an orchestral equivalent of a children's game to spatio-cosmic flight.

But the excellent title work "Piano Concerto No. 1: A Shifting Trek" especially stands out. Here Hodkinson brings a very eloquently expressed modernist soundscape to bear against a piano part that has genuine character, played with elan by Barry Snyder. There is an energy at times to this music which is virtually unparalleled among American composers of the present. It is a showcase for all concerned and sounds great on my stereo too!

Here is a composer who projects his musical self outwards with a very personal yet very much contemporary expression. He has much to say and in the saying brings some very exciting, beautifully crafted orchestral music to our senses.

If you love the monumental potential of orchestral music written today, this one is going to give you a good deal of pleasure. Bravo!