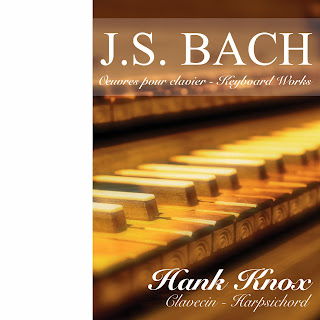 Anyone serious about "serious" music should have at least one disk of Johann Sebastian Bach's harpsichord works. But which one? There are the Well Tempered Clavier Preludes and Fugues, but there are many of them, all worthwhile to say the least, but they fill out a fair number of disks. The Two-and Three-Part Inventions are wonderful, but do not provide a full picture of the more virtuoso side of Bach's keyboard works. Well those certainly should be in anyone's library, but as a starter disk, you are doing yourself a good turn if you consider Hank Knox's recent recording Oeuvres pour clavier/Keyboard Works (early-music.com 7775).

It has a good variety of works--those composed out of his well-admired improvisations and those conceived in his head away from the keyboard. There is a good amount of the fugal-contrapuntal style by which Bach continues to astonish, and also moments where there is attention to less complicatedly contrapuntal and more chordal-melodic expression, relatively speaking.

It's a nice introduction to the Master, played with appropriate bravura by Hank Knox, who teaches in the Early Music program at McGill University and has concertized extensively on the harpsichord throughout the world for many years.

You get a "Ricercar a3" from Bach's stunning Musical Offering, the "Overture in the French Manner", the "Chromatic Fantasy and Fugue", BMV 903, and several other gems. This is a great place to start if you don't have Bach solo keyboard music in your head as yet. However it also is a pleasing performance and a pleasing programming sequence so that anyone who loves the music will gain a version of these works that glows with authenticity and great spirit.