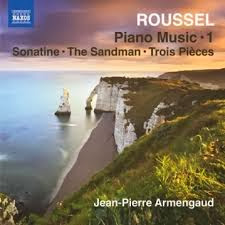 Sometimes the world appears as a field of vision, a gestalt whole, and looking at it throughout your life there are details that only emerge gradually from the background. I am having that sort of breakthrough with the composer Albert Roussel (1869-1937) who before now I tended to lump together with the French Impressionists, meaning that I paid too little attention to what makes Roussel a voice in very much his own right.

That changed a few weeks ago when I put on the first of a projected (complete?) series of volumes devoted to his solo piano music. Piano Music 1 (Naxos 8.573093) gives us Jean-Pierre Armengaud's renditions of a good selection of Roussel works spanning the period 1904 to 1933, much of his career.

What is surprising is that other than "Le Marchand de sable qui passe - musique de scene, Op 13" (1908) which enjoys its first recording in the piano version, there is less of an obvious Debussian-Impressionist flavor to this music than I would have expected. Or rather it would be more accurate to say that Roussel is on his own turf from the 1912 "Sonatine" on. There are proto-modernist moments, an idiomatic pianism, a distinctive melodic-harmonic fluorescence, a sensuous quality to his music that cannot be reduced to "what was in the air" at the time.

The "Trois Pieces, Op. 49" (1933) is an excellent example. There is rhythmic vitality, a quirky melodic asymmetry, a modern modulatory sort of feel.

There are no clinker pieces on this disk. Everything is very well imagined and executed, even the earlier works. Jean-Pierre Armengaud has the drive and pianistic poeticism to make these performances sound in a way Roussel no doubt would have approved. The man who taught Satie and Varese had his own way. You can hear that quite nicely on this Volume One. Bring on the second!