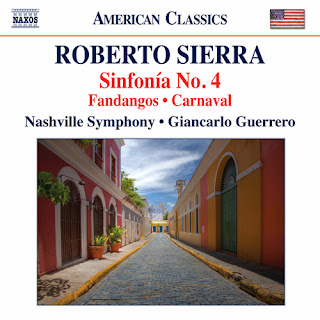 Roberto Sierra (b 1953) has a way with the orchestra and a style of his own. He was born in Puerto Rico, studied with Ligeti, teaches at Cornell and is the composer of many works that are admired and performed throughout the world today. All this is background to a new Naxos recording of three of his recent orchestral works, Fandango, Sinfonia No. 4, Carnaval (Naxos 8.559738), played with detailed care and enthusiasm by the Nashville Symphony under Giancarlo Guerrero.

These later works have a pleasing multi-dimensionality, with basic thematic-harmonic material that is overlaid often by embellishments, modernistic often enough, advanced and advancing the flow of the music.

As Sierra notes in the liners the Fandango was the subject of classical treatment fairly early on in compositions by Soler, Boccherini and Domenico Scarlatti, and all three composers and their respective compositions form the basis for Sierra's own "Fandangos" (2000), a lively work with brilliantly conceived orchestral elements playing against the Fandango progression.

"Sinfonia No. 4" (2008-2009) is the most ambitious of the three compositions, a full fledged four-movement work that includes a bolero and a clave influenced movement. It is a simultaneous homage to and (what he terms an) anthropophagy (cannibalistic devourment) of the classic symphonic form with Spanish/Latin elements and modernistic reassertions in a most appealing maelstrom of elements that give the work its own structure and mark Roberto Sierra at his best.

The final work "Carnaval" (2007) brings five diverse movements into focus, each one devoted to a mythical creature: Gargoyles, Sphyxes, Unicorns, Dragons and the Phoenix. The music reflects in Sierra's well developed musical language the salient character of each.

These are works that stand apart from the typical offerings one can hear for the orchestra in the new Millennium. They span periods and styles, Spanish idioms and classical forms and transform everything into a Sierranian landscape of kaleidoscopic fullness. Neither overtly modern nor neo-previous in their makeup, they blaze a very personal path through the summing up and summing out that often seems to be taking place right now.

Sierra is important to today without taking a jarringly exceptionalist manner nor complacently adopting the old without transforming it to his own sensibilities. The Nashville Symphony under Guerrero sound perfectly nuanced and bold as needed in their reading of these works.

The disk is a definite winner! Do not let this one slip by if you want to be up on the classical symphony today and the possibilities of realizing, like the Phoenix, something transformed anew from the ashes of a musical legacy or, rather plural, musical legacies. Roberto Sierra does that very, very well and so his music is all the more enchanting for it.