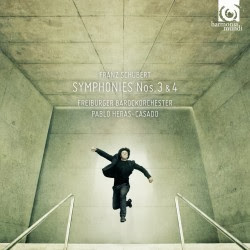 Schubert's early symphonies are somewhat unduly neglected compared to his final works. Some are clearly classical in breadth and scope, some straddle the fence over which lies Beethovian romanticism. All were composed while Schubert was not even out of his teens. I've heard readings of them that give all a more-or-less Beethovenian blast, others that sound like they were written (as they were) for a modest ensemble without special technical polish. The Freiburger Barockorchester under Pablo Heras-Casado give us renditions of his Symphonies Nos. 3 & 4 (Harmonia Mundi 902154) that have all the authentic brio of a crack classical period orchestra of modest size yet also as appropriate bring in some of the Beethovian elements in Symphony No. 4 as suggested by the "Tragic" thematic material.

None of the early symphonies were heard by Schubert (or anyone else) during his lifetime, which is tragedy enough. Yet they have real eloquence, including plenty of lyric and dramatic elements worthy of Schubert's genius. Heras-Casado and the Freiburger organization give the music stateliness and stature as called for, passion in good measure and well-balanced directness consistently. They neither over- nor underplay them but find the right balance for each.

These are versions that have the ring of authenticity. I still have several on vinyl, some well-regarded at the time of their release, but they do not satisfy me as these versions do. I hope Heras-Casado and the Freiburger Barockorchester go on to do the whole cycle. They seem perfectly suited to bring out the brilliance of the younger Schubert and I'll bet would give us insightful readings of the later symphonies as well.