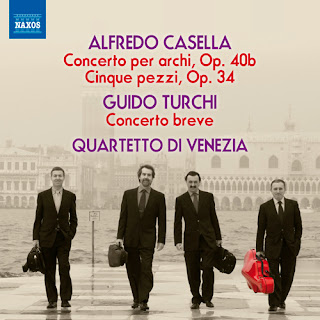 I'll admit that my listening knowledge of Italian composers between Respighi and Dallapiccola, or in other words between Italian Impressionists and the 12-tone composers, is limited. That middle ground of modernism that I am missing I did begin to cover some weeks ago in the piano music of Malipiero (see posting of November 14th of this year). The period is also filled importantly by Alfredo Casella (1883-1947) and to a lesser extent, Guido Turchi (1916-2010). Since my young years I have had an old vinyl disk of Ansermet conducting Casella's "La Giara", which I like well, but I have not until now gotten around to exploring more of his music.

I did take the plunge lately by requesting a review copy of the string Quartetto di Venezia playing a number of compositions by Casella and one by Turchi (Naxos 8:573019) and so my journey begins. The two string quartet works by Casella appeal to me very much. The "Concerto per archi", Op. 40b and the "Cinque pezzi", Op. 34 are more-or-less the Italian equivalent of something somewhere between the expressionism of the Viennese pre-twelve-tone work of Schoenberg and his followers and Stravinsky in his neo-classic period, only they sound like Casella. These are multi-movement works with some extraordinarily brio passages, a sometimes nearly atonal tonality, compactness of movement form and some definite Italian touches here and there. The Five Pieces are somewhat less formal and work together more as a suite than a unified work. And that affords the listener with a nice contrast with the other more concerted music.

Guido Turchi's "Concerto breve" has a somewhat similar trajectory from what I hear. I have had trouble burning DVDs lately off of my computer so I was unable to listen to his work at great length but it seems well constructed and fits in quite nicely with the Casella.

The Quartetto di Venezia are very suited to this music and render for us performances that are spirited and sensitive. Bravo. This is one fine disk. It is giving me a good deal to absorb and appreciate. Recommended.