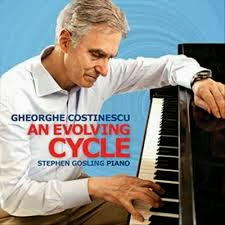 Gheorghe Costinescu (b 1934), a composer we should know more of than we do, was and is a primary modernist who earned an MA in Composition from Bucharest University, studied with Stockhausen, came to New York in 1969 and studied with Berio at Julliard, then went on to receive his PhD from Columbia after studying there with Chou Wen-chung.

On July 31, 2012 I reviewed his Jubilus and Pantomime DVD here and it woke me up to the man's music. Today we return to him in a CD of his piano music, An Evolving Cycle (Ravello 7878). It contains a chronology of four piano works composed between 1956 and 2011, sometimes of Promethean difficulty, reflecting the stylistic movement from baroque through very modern forms, becoming ever more expressionistic and extra-tonal. The works are played with dramatic, dynamic virtuosity by Stephen Gosling, who judging from this recording is a vastly talented artist. He has the fire and the technique these works call for, and has it in abundance. The performances are remarkable.

The four works show the evolution of the composer's thinking from the very early (1956) "Theme and Variations", which shows an already gifted inventive sense, through to the "Sonata for Piano" (1957, revised 2007-08), the "Evolving Cycle of Two-Part Inventions for Piano" (1964) reflecting the gamut of period styles from the baroque onward in inimitable ways, and finally the very abstract "Essay in Sound" from 2011.

The music impresses by its singular dedication to drawing highly structured yet extraordinarily expressive, pianistically sympathetic, beautifully inventive music for 88 keys and a virtuoso with colossal dedication.

I have to say, this one is a milestone in modern piano works and their performance. From first until last we are treated to a major composer (albeit rather unknown) as played by an extraordinarily gifted pianist.

If the modern, advanced world of contemporary pianism rings the right resonances with you, this will be a revelation. By all means listen to this one!