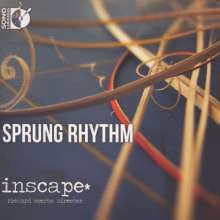 New American composers with voices of their own is the focus of Sprung Rhythm (Sono Luminus 92170) brought to you by Inscape*, a chamber orchestra ensemble under the direction of Richard Scerbo. As no doubt may be familiar to readers of this blog the composers' names will probably be unfamiliar. They are the newest of the new, I suppose you could say, but they all have something good to offer. They are Nathan Lincoln-De Cusatis, Joseph Hallman and Justin Boyer.

As is mostly the case with Sono Luminus releases, there is a two-channel CD plus a 5:1 surround Blu-ray Disk. The Blu-ray duplicates the CD program plus adds an additional work by Justin Boyer. (I do not have a Blu-ray player so was unable to hear this bonus work). Otherwise there are five works represented: "A Collection of Sand" and "Chopin Syndrome" by Lincoln-DeCusatis, "Three Poems of Jessica Hornik" and "Imagined Landscapes: Six Lovecraftian Elsewheres" by Joseph Hallman, and "Con Slancio" by Justin Boyer.

First things first. The sound and performances are exemplary. The audio is sparklingly clear and Inscape* performs with musical directness and considerable skill.

Then the works themselves... each one has character and a chamber modernity that has a tonal basis without opting for primality and a rhythmic quality that is mostly quite lively. The influence of Stravinsky can sometimes be felt in that wise. And at the same time there is more a neo-classical feel to the music certainly than the neo-romantic. But that makes the program all that more enjoyable since it is so well done. Soprano Abigail Lennox's performance on "Three Poems of Jessica Hornik" is superlative and a definite high point of the disk.

Rather than to go into details on the works in any depth at this point I will just say that this is music that is so well-crafted and well-performed that virtually anyone who likes the idea of new music will respond favorably. It's a joy to hear this disk!