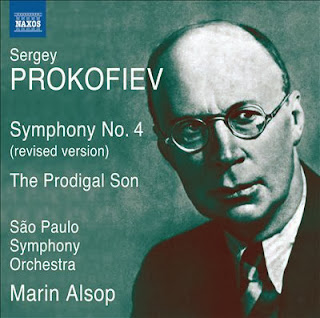 Prokofiev has long been a favorite of mine. No other composer of his century quite managed, at least in his early-to-mid-period, to have such supreme melodic gifts yet also be imbued thoroughly with the spirit of modernism...and create such a tempestuous energy level in his best works at the same time. My principal composition teacher was of the opinion that Prokofiev was a mere distillation of Stravinsky, but I don't think he listed closely enough. Sure, they are related in their Russian qualities and modern outlook, but not at all clones. Like Beethoven and Schubert, they belong together in an overall ethos sense, but one who knows wouldn't confuse the two. There is brilliance in both far above their similarities. The same could be said for Stravinsky and Prokofiev.

The Prokofievian singularity can be heard to great advantage in his Symphony No. 4 and his ballet The Prodigal Son (Naxos 8.573186), which belong together as thematically-stylistically related. Marin Alsop conducts the Sao Paulo Symphony in this well conceived disk. Following their earlier, excellent performance of Symphony No. 5 (type it in the search box for my review), Alsop and the Sao Paulo organization come up with a beautiful, thoroughly idiomatic reading of the two works represented here.

Prokofiev's Fourth has often been overshadowed by his Fifth, with its WWII angst and agitation, yet the Fourth is a beautiful work in every way, fully worthy of attention for its Prokofievian charms, its nearly heartbreaking bitter-sweet melodies, its dance-like rhythmic insistence, its ravishing orchestration. The Prodigal Son is a full ballet that the symphony is based upon, so what is true of one is perforce true of the other in slightly different ways.

Alsop and the Sao Paulo Symphony give performances very faithful to Prokofiev's vision. Detailed, both lyrical and hard-edged when needed, playful in an ambiguously sarcastic sort of way, as good as any performance I have heard. This is the revised version of the symphony, which Prokofiev came back to and reworked slightly later on. I believe that is the version most often played historically, since it seems eminently familiar to me from the vinyl versions I have listened to over the years.

You can do no better than these readings. Alsop knows her Prokofiev and the Sao Paulo outfit comes through with a beautiful and energetic performance that leaves little to be desired. Considering also the Naxos price, you can not do wrong with this one! Seminal Prokofiev, played with all the attention to detail, passion and fire you could want!