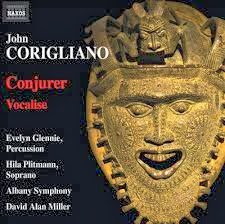 It may be that because composer John Corigliano has created his impressive body of works while I have been in the course of my everyday life, for that reason I have not yet had a chance to follow the flow of musical ideas in a chronological sense, and to come up in my head with a synthesis of what he is about. But in any event he strikes me as a composer of multi-stylistic tendencies. The music always has a modern slant in one way or another, but the spectrum of stylistic avenues his music can travel is wide, and the music always seems to me brilliantly crafted.

The new disk devoted to two of his works, in world premiere recordings, are fine examples of the unfolding adventure that is Corigliano. It gives us definitive first looks at Conjurer and Vocalise (Naxos 8.559757).

Conjurer, subtitled Concerto for Percussionist and String Orchestra with Optional Brass (2007), is performed by the Albany Symphony under David Alan Miller, with Dame Evelyn Glennie as percussion soloist. It is a rather captivating work that takes advantage of Glennie's subtle, nuanced manner with the many instruments she is called upon to play. It is a work of space and sound color, with judicious use of the orchestra to expand the impact of the percussion part and comment on it in a classic give-and-take dialog. These moments are offset often enough by quietude surrounding the percussion cadenzas. There are dramatic climaxes that punctuate the entire work, give structure through periodic envelopes that end in sound cadences involving color intensities rather than harmonic resolve. It's a highly charged, highly effective work. Glennie and the orchestra do it the justice it deserves.

Vocalise (1999) shifts gears to feature soprano Hila Plitmann and an electronic, audio engineering sort of part produced by Mark Baechle. This was a piece commissioned by then New York Philharmonic director Kurt Masur. Corigliano was instructed to write a work that would give the audience a specific message to contemplate on the eve of the Millenium. Corigliano conceived of a work for soprano, orchestra and electronic manipulation/amplification of the vocal part by an electronics "operator", as it were, following directions in the score.

It starts with a mysterioso sort of quiet in the orchestra and a vocalise line for soprano that evokes and heightens a feeling of a new world opening up into the future. A sometimes cacophonous, affectively sustained series of climaxes occur somewhere after the midpoint of the work, breaking the initial mood and bringing on the electronic manipulation. It is a series of purposive interruptions of the mysterioso feeling. It is as if Corigliano is telling us that the new Millenium will not all be smooth sailing. (And we now can reflect back and see how right he was, of course.)

It all works together to create yet another high-drama sound color essay in a more highly charged, less Zen-like atmosphere than we hear in Conjurer. So the contrast is a lively one.

The two works complement and give us two excellent examples of later Corigliano. He is surely one of the major lights in the contemporary musical firmament and the Naxos disk gives us two major reasons why that is so. The performances are beautiful, the soloists wonderful, and all makes for an exemplary experience of what's modern about today's modern music. Highly recommended.