Joy to the World, An American Christmas, Harry Christophers, Handel and Haydn Society 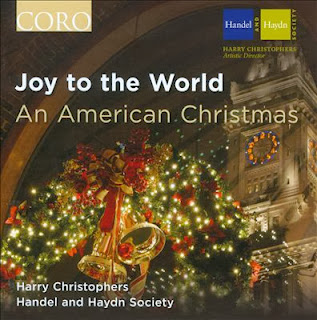 Those who came across from Europe to America brought their Christmas carols with them. In the years that followed composers and hymnists created others. It is to this body of tradition that Harry Christophers and the choir of the Handel and Haydn Society turn on Joy to the World, An American Christmas (Coro 16117). It is quite fitting given that the Society celebrates its 200th anniversary this year.

The s-a-t-b choir has been a part of American celebrations as far back as you care to go. The US doesn't have boy choirs much, like England and Vienna. But the acapella mixed choir is a staple of Christmas carols here. When I was a kid the Robert Shaw Chorale had a best-selling album that mixed the more obscure older songs with the standard fare.

Christophers and the Society certainly come through with beautiful sonics that remind me of the Shaw disk, actually surpass it since the technology is more up to the task today and the choir is an excellent one. Christophers savors each with often leisurely tempos that invite reflection. The choice of carols is especially fine, giving us the all-familiar in the title song and "Carol of the Bells". But then the very venerable and/or sometimes lesser-known carols get plenty of attention. There's one by Charles Ives, Holst's "In the bleak midwinter", two versions of "In dulci jubilo", the alternate Protestant American melody to "O little Town of Bethlehem" as well as the traditional one, the old folk song "I Wonder as I Wander", and so forth.

There is enough of the more obscure with the familiar that it gives you the full tradition without stinting, something your ears can grow into over time. The choir sounds ravishing.

It can be a fulcrum point for holiday reveries, to give you a feeling of time both passing and never passing. Highly recommended.