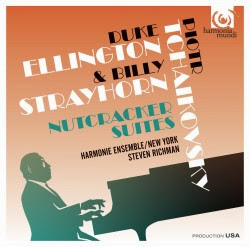 When I was but a lad, with visions of sugar plums dancing in my head (well actually, no, even in my halcyon days sugar plums were not in the picture. I've never seen one, then or now. . .) my dad had an LP of Tchaikovsky's Nutcracker Suite, a budget version with a less-than-stellar performance, but good enough to get the music across. It was at that point the only classical record my parents both liked and it found its way onto the hi-fi that was my dad's delight, and mine, too.

It was a part of the holiday record rotation around the house, and I sure fell under its spell. By the time I was somewhere in mid-adolescence my friend brought over a copy of the Duke Ellington organization doing the Ellington/Strayhorn version of the Suite. That sure sounded good to me, too.

Steven Richman and the Harmonie Ensemble/New York had a great idea to do both versions and put in onto one CD (Harmonia Mundi 907493). And so there's the release out there this season for the first time and I've been listening.

It's very good on both counts. The classical, original orchestral version is performed with plenty of spirit and pep, as good a version as you'd ask for. And the Ellington/Strayhorn version has an authentic ring to it. The band and soloists are totally into the late '50s Duke style and give it all they've got.

Now of course the original Duke version has the edge over this performance. Surprisingly though Richman comes very close.

Of course the advantage with this release is that you get both versions in totally idiomatic renditions. So I don't think you need hesitate if this combination sounds good to you. I will certainly be playing it over the holidays and, if the fates are kind, in holiday seasons to come. So Season's Greetings to you all!!