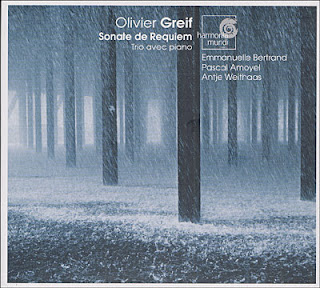 Olivier Greif (1950-2000)? Why is it I have never heard his music until now? Part of that has to do with his non-adherence to Darmstadt modernism and his subsequent non-involvement in post-modernism. His parentage was Polish-Jewish, but Paris was where he grew up and lived his life. His early death translates to his physical absence in the new millennium, when in some ways all stylistic bets have been off and an idiosyncratic stance is neither rejected out of hand nor defined as an entryway to school-foundations. In other words the time is ripe for his music to be more widely appreciated but of course he cannot be here to enjoy the fruits of his labor. Put all of these factors together and you do have some answers as to why his music did not offer itself to me in my previous years of listening and appreciation.

The CD on tap this morning is one that does full justice to Olivier Greif. It is a program of two of his works, the Sonata da Requiem (Harmonia Mundi 901900) (re-released this year in the Gold series HMG 501900) for cello and piano, and the "Trio" for violin, cello and piano. The performers help make this program stand out in a spectacular way. They are Emmanuelle Bertrand on cello, whose unaccompanied CD I have reviewed recently here and who is eminently well suited for this music. Then there is Pascal Amoyel on piano, Emmanuelle's partner in music and life, someone we've covered here as well and a very sympathetic exponent of Greif on this recording. Finally there is violinist Antje Weithaas, who joins the two for the trio and sounds perfect for this music as well. The performances are rather stunning.

The "Sonata de Requiem" is Greif's four-movement meditation on death. Written between 1973-1993, it blossoms in its very personal juxtaposition of quasi-romantic expression, dirge melodies in minor that to me reflect a Semitic musical influence, and the interjection of beautifully crafted modern non-tonal, extra-tonal passages, sometimes articulated simultaneously with minor-tonality expressiveness, sometimes in their own right.

There are similarities to be heard with the early-middle period music of Messiaen, in the way the two (or three) stylistic strains weave together in ways that people like Boulez have eschewed. In that there is also something akin to Charles Ives in his welding of disparate strands. But Greif sounds like neither. What he puts together and how he does it makes for a very personal approach. He is a tabula rasa in some ways and all the more interesting for it.

The Trio (1998) goes well with the Sonata, again in a poly- multi-stylistic way. Bertrand, Amoyel and Weithaas convince totally with the dramatic, dynamic readings of the two works. They soar with passion, they make the dissonant modernist parts seem inevitable and right, not a stitched-together patchwork quilt of sorts, a language of fluency, of singular totality.

This is music of genuine contrasting interest, even perhaps of genius, performed with brilliance. Although it came out a few years ago it is as vital today as it was then. Superb and uncategorizable!