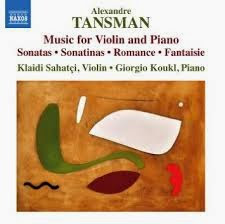 Anyone who lived from 1897 to 1986 saw an enormous amount of change both in the musical world and the socio-political one. Composer Alexandre Tansman was such a person. Growing up in Poland he migrated to Paris in 1919, where he was exposed to the burgeoning new music scene there. From that point on his music abandoned a late-romantic rooted style for one more cosmopolitan and modern-oriented. You can hear the shift and the development of his music rather clearly in the new volume Music for Violin and Piano (Naxos 8.573127), with Klaidi Sahatci taking the violin parts and Giorgio Koukl on piano.

Tansman's "Romance" (1918) and his "Sonata No. 2" (1917-19) mark him as composer of promise. They are rather firmly in a late-romantic style, rhapsodic and not yet entirely original sounding. His move to Paris and subsequent musical development can be heard in the works that follow, presented chronologically on the program.

The "Sonate quasi una fantasia" (1924) marks the shift and maturation of his music with some striking invention. The violin part continues to be highly expressive, but the framework has shifted to one more harmonically and melodically expanded. It is a work of considerable merit and gives us a Tansman influenced by Ravel and the French school of the era, but also with something eastern and/or Polish in its inflections. It does not sound like Prokofiev but it also has some kinship with him in its drive and bittersweet quality and at times there are echoes of his Polish homeland in some of the melodic and rhythmic content.

The "Sonatine [No. 1]" (1925) has a drive and even more of a comradery with French impressionists. There is an increasingly lyrical modernism at play. The music brings folk and popular dance elements, even a bit of a jazziness with a foxtrot movement that exists jauntily alongside a lyric and slightly edgy violin part as a whole. All that combined gives us a Tansman we can certainly by this point call original. The music is memorable and has been neglected for far too long.

We jump ahead to 1941 and his "Sonatine No. 2." It continues the lyricism that has been with him all along and yet there is an increasing translucency in the piano part that is contemporary in an impressionist way. There is the tang of modernism without much of the stridency that was in vogue among many of his contemporaries. Yet there is a rhythmic vitality and complex melodic character to the music, especially in the final movement, and all that marks him as of his time. It is his way here to stick with and grow upon the implications inherent in his early modern lyricism that puts him in his own original world.

The final work, the 1963 "Fantasie" is a good deal more harmonically advanced and brash than what went before. The complex driving motor qualities are ever more pronounced, the interplay between violin and piano ever more dynamic and brilliant, and a virtuoso vivaciousness is more at the forefront than with the previous works. The first movement shows this tendency with breathtaking presence. Then follows a tenderly lyrical slow movement that continues that element of Tansman at its most completely original. A chromatic fugal theme develops in the third movement that is a wonder to hear. The following movement explodes forward in a very dramatic restatement of the fugal passages that must be experienced to appreciate. Another, simpler and more diatonic fugal movement follows, with the simpler tonality functioning almost as a rejoiner to the turbulence and resignation (if that fits the mood) that precedes it. The final movement gives voice to a great, energetically vital expressive stridency that conveys much momentum and excitement. And so it all ends.

Sahatci has the expressive and technical means to pull off the violin parts impressively. Koukl has a dynamic and rhythmically acute knack to make his crucial role felt with real sympathy to the music. They form a team uniquely suited to the very diverse shifts in expression that are so much a part of this music.

This volume gives us four of six of the works in their premiere recordings. Why the mature music has been so neglected no doubt has to do with Tansman's not belonging to prevailing modernist schools that had such a powerful force on the music scene in the last half of the 20th century. I can come up with no other reason, for the music most certainly bears our attention. The performances are just right and the music stands on its own as very well-crafted, generally inspired and increasingly original as Tansman came into his own. The music gives us much to appreciate.