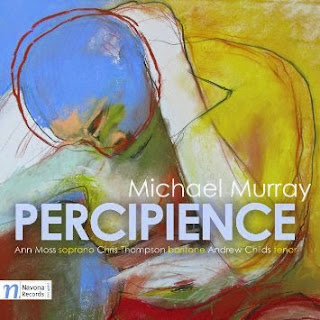 Song cycles, lieder, I don't seem to hear much of it in the most contemporary releases. No doubt I am missing some of it. An exception is Michael Murray, whose anthology of four song cycles, Percipience (Navona 5994) impresses me. He was born in 1964, which makes him younger than I. He currently teaches composition and theory at Missouri State University.

The lyrics are uniformly worthwhile: William Blake, Biblical, Thomas Hardy and John Donne give us words that evoke and are good to contemplate. The settings seem very right for the lyrics. The music is melodious, modern in a tonal way, deceptively straightforward. Accompaniments further the songs and echo the various moods appropriately. All show the signature style of a contemporary craftsman-artist of original stripe.

The voice writing seems very natural, unforced and giving the voice qualities pride of place. Vocal soloists and instrumental forces all perform well according to the demands of the music. There is drama, melancholy, joy and reflectiveness as needed.

Murray leaves us with some very memorable music, songs that hold their own as themselves, reflecting the rhythmic feel of the poetry and so sometimes folkishly archaic, sometimes freely expressive. always inventive and movingly unified.

Murray gives us songs that stand out. They are masterful examples of the form in our contemporary world. Anyone who gravitates towards such things will no doubt appreciate this album. Bravo!