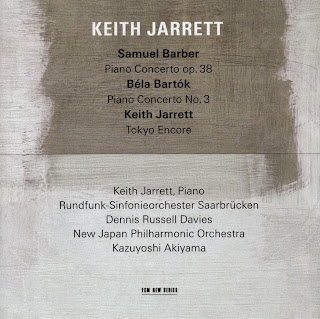 Keith Jarrett celebrates his 70th birthday with two releases. One a solo piano disk, Creation, which I covered on the last post. Today there is the second, a live recording from 1984-85 of two seminal modern concerto works that give us a look at Keith at a peak in his classical performance style, before a skiing accident injured his hands and he was no longer able to play at the highest edge of virtuosity.

Lucky for us these live versions were recorded before that calamity and we get his versions in all their considerable splendor and smouldering, blazing fire. They are available now as an ECM New Series release (B0022987-02) Samuel Barber Piano Concerto, Bela Bartok Piano Concerto No. 3.

As live, unedited recordings they do not have the extreme polish of a carefully done and redone studio date, but they make up for in excitement what they may lack in absolute perfection.

Two orchestras and conductors handle the accompaniment; for the Barber it is the Rundfunk Sinfonieorchester Saarbrucken under Dennis Russell Davies, for the Bartok it is the New Japan Philharmonic Orchestra under Kazuyoshi Akiyama. They give us warm and committed versions of the works, not absolutely perfect given the live situation, but no discernable clinkers either. They enter into the spirit of the music as called upon, and they do it admirably and satisfyingly.

The center of attraction remains rightly with Jarrett and his artistry. Both works are superb modern 20th-century examples of the concerted art and Keith does wonders with the piano parts. The Barber is less played than one might like, but is a masterpiece, with devilishly difficult pianistic demands and a very modern sound, Barber at his best. The Bartok is familiar to most and gets more than its due.

Jarrett is breathtaking much of the time in his flowing, nuanced yet pyrotechnic performances of the works. He immerses himself in both works and yet manages to convey his incredible personal pianistic magnetism, which bursts forth with triumphant energy and lyricism in both cases. Repeated hearings bring home the brilliance of his way with the works.

The program ends with a solo improvisation from the Japanese concert. It is rather brief but glowing and a very fitting end to this welcome addition to the Jarrett discography. You may well have versions of both concertos. The Jarrett versions are so distinctive that they should be heard nonetheless.

A triumphant trip on the musical time machine we get. I can't imagine a better birthday tribute to the master pianist, when coupled with the latest solo improvisations on the release Creation. These two along with a previously unreleased classic trio date from the earlier years (see my Gapplegate Music Review article from several months ago for that) gives us a three-pronged semi-retrospective/introspective on virtually all that Jarrett means to us. I am very happy to have them to hear in the years to come and I imagine you will, too.

But by all means get this one regardless of whether or not you follow the more jazz-oriented side of his artistry. It is golden.