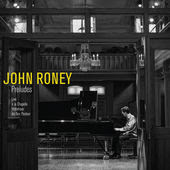 In a mini-series of reviews on the art of the solo piano improvisation in classically related modes, we have today a final example in the playing of John Roney and his recent Preludes (Effendi 138). I was not familiar with his music until now. The album adroitly draws upon classical and jazz themes for its improvisational impetus, so we get mostly familiar such things with Bach, Gershwin, Debussy, Duke Ellington, Chopin and Scriabin.

Roney is more concerned generally speaking with making interesting music than packing each improvisation with technical prowess, though he certainly has technique. It's all about taking a theme and interpreting it in whatever way Roney's imagination takes him, sometimes in a shimmering cantabile, a modern openness, influences of a jazz sort, but also quasi-concerted arpeggiations, modulations, reharmonizations and harmonically extended excursions, right-hand melodic inventions against left-hand motival patterns, bluesy moments, in all a full gamut of creative possibilities that call upon everything from romantic piano sounds to jazz and even Emersonian rock influences, impressionist musings and beyond.

Can you tell he is more classically oriented than jazz at the basis of his background? Yes and no, since convergences are such that a jazz-grounded player might conceivably produce a series of improvisations like this without sounding surprisingly out of character. But nonetheless the choice of themes and their treatment generally come out of a more classically inundated creative mind. The jazz element is slightly more tentative much of the time.

If there is a convergence at times it happens as an outgrowth of his thematic treatment. He can occasionally sound a little Jarrettian, but then of course Keith Jarrett sometimes works out of romantic-impressionist models. Roney may be not quite at the inspired level of Jarrett at his best here. But then he goes his own way as often as not, into territory that sometimes may be less "deep" but engaging and inventive in its own way.

The use of familiar themes as springboards will give the listener a grounded sense of where he goes. For those not accustomed to close listening of improvisational moments that may indeed provide you with a kind of musical map to get your bearings. Roney is talented and lyrical as well as dynamic. This is a good listen in a tonally accessible vein from a pianist who is developing his own way. Give it your ears!