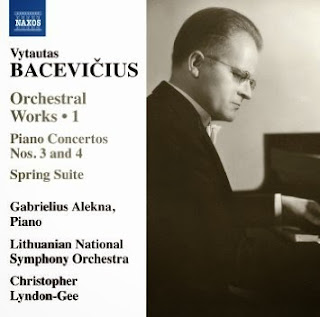 Today, another 20th century modernist composer who has suffered neglect, one Vytautas Bacevicius (1905-1970), brother of the far better-known Grazyna Bacewicz. His legacy and its relative obscurity have something to do with the fate of circumstances. He was on tour concertizing as a virtuoso pianist in South America when WWII cut him off from his Polish homeland. He migrated to the United States and lived out his years there with some success but perhaps more as a pianist than a composer. If he is all-but-forgotten today, a number of recordings seek to redress that, most notably his Orchestral Works I (Naxos 8.573282), played by the Lithuanian National Symphony Orchestra under Christopher Lyndon-Gee.

Three works get our attention, two of which enjoy first recordings. They all stem from his period of exile, ranging from 1946/49 through 1962. Piano Concertos Nos 3 & 4, the latter in first recording, feature pianist Gabrielius Alekna as soloist. The 1958 "Spring Suite" appears in the middle of the program, and is the other first recording.

All the music has an Eastern European modern chromatic expansiveness. The album shows us a composer that perhaps has Scriabin as an influential forebear but otherwise seems to move within his own orbit, neither archaic nor Serialist-Darmstadtian. It is music well thought-through and takes a few hearings to assimilate. The Fourth Concerto is something of a major find, with a difficult and dexterous piano part, a very advanced orchestral presence, a very modern feel to it, on the edge of tonality and beyond.

The performances are good, especially those by soloist Alekna. There could possibly be even better performances someday but for now this gives us a vivid, balanced and dramatic picture of a compositional personality that deserves recognition. Anyone with an interest in Eastern European modernists should hear this one. And so should anyone following 20th century developments. I will certainly want to hear this disk a good many times more. It is complex and satisfying music that sounds fresh and very much alive. I look forward to future volumes.