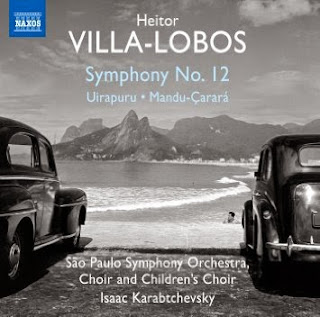 Of all the twentieth century composers we recognize as important, Heitor Villa-Lobos is one who occupies his own territory. He is modern, yes, and he incorporates Brazilian folk elements, surely, but there is something else, something unique about his music that goes beyond category, that is much more than the elements that go into his compositions.

We can hear this readily in his last symphony, No. 12, composed in 1957 when he had reached the age of 70. The Sao Paulo Symphony Orchestra under Isaac Karabtchevsky give us a fully idiomatic and exciting reading of the work in a new release (Naxos 8.573451). It is part of their complete Villa-Lobos symphony cycle and as usual a very worthy effort. (See my review of other recordings in the cycle by typing in the search box above.)

We also get his 1917 opus, "Uirapuru," a very modern-folkloric amalgam, and his scarcely known secular cantata "Mandu-Carara" (1940) in a good recording that adds the Sao Paulo Symphony Choir and Children's Choir.

All this gives us a good hour of excellent Villa-Lobos, the symphony in every way a culmination of his work in that medium, rhythmically vital, harmonically rich, with orchestrations that bring out his mastery of orchestral sound in the four-dimensional way only he could conceive of. And the bonus works are far more than extras, important in their own way and a pleasure to hear performed with the zeal, excitement and care that typifies the series.

There is nothing lacking in the recordings, the performances and the quality of the compositions. Anyone seeking to understand Villa-Lobos will be well-served by the album, as indeed will those who already love his music like I do.

Excellent. More than worth the modest investment. Many stars, if I were to rate things that way!