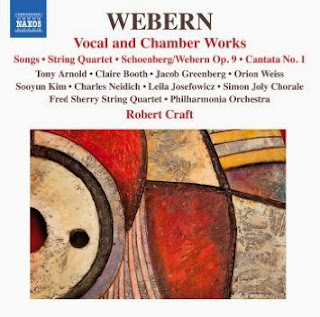 It may well have been a day like today, sunny and spring-like, when I visited the Lincoln Center Music Library and found in the huge holdings of LPs at the time the complete works of Anton Webern (1883-1945), as recorded by Robert Craft. I was 18 and pretty well familiar with Schoenberg and Berg, his compatriots in the Viennese 12-tone school, but I was in for something special nonetheless, as Webern has a completely original brilliance all his own. As I listened to the terse, lucid, mostly miniature works one after the other I felt I had discovered one of the wellsprings of modernity. Of course this was and remains very much true.

Time went by and I eventually acquired the Craft set, then the later set of complete Webern as recorded by Boulez, but nothing matched that initial discovery. The Boulez version was excellent, but like much of Boulez's versions of other modernists, there is a good deal of Boulez's own brilliance in the interpretations, so that Webern gets squarely situated in the serialist, Darmstadtian sensibility that he had made possible. The Robert Craft versions were more matter-of-fact, perhaps less interpretive but also perhaps closer to the original Webern intentions. Over the years both versions got my scrutiny and appreciation, and both seemed necessary.

Now these many years later I discover that Robert Craft has done a second version of the Webern cycle which has been released on Naxos. I come to the music as the final volume of the series is released, Vocal and Chamber Works (Naxos 8.557516). As it happens I especially liked Craft's versions of the vocal works on the first version of the cycle, and that holds true again for the new recordings. The song sets and Webern's "Cantata No. 1" cover a wide period from 1908 through 1939.

Robert Craft's versions are if anything even more insightful here, with Tony Arnold and Claire Booth singing the parts very convincingly, the Simon Joly Chorale sounding very good, and the intricate instrumental background coming off quite well in the hands of Jacob Greenberg, piano, the various instrumentalists and the Philharmonia Orchestra.

In addition the volume covers nicely Webern's "Six Bagatelles" and "String Quartet" as performed by the Fred Sherry Quartet.

As a bonus we get the Webern revoicing of Schoenberg's 1906 "Chamber Symphony," which shows us exactly how attuned Anton was to the sound qualities of piano, winds and strings.

As always the miniaturist every-note-counts brevity of Webern is wonderfully on display. Robert Craft outdoes himself on this second go-round; nothing is unessential on this final volume of the Naxos series.

No student of modern music should be without this one. And for the Webern enthusiast the versions so effectively set out here are a vital addition to the Webern recorded repertoire.

Smashing! Get this one if you can. And no doubt the whole set is worthwhile, too.