Bang On A Can All-Stars, Field Recordings 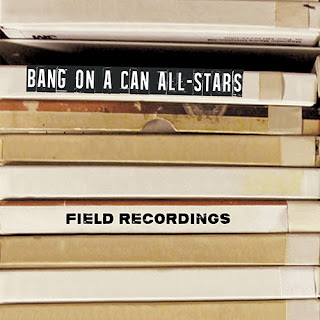 The premise behind the Bang On A Can All-Stars album Field Recording (Cantaloupe CD & DVD) was simple. Each composer commissioned for the project was asked to select a pre-existing recording or create one anew and utilize it as a sort of found object to compose music around. The original tape and its permutations are played back and performed against by the Bang on a Can chamber ensemble according to the respective score the composer created.

The premises are simple but the music is far-ranging and very inventive. Source sounds vary widely, from traditional Irish folk singing to street singing, from John Cage reading from his diaries to gospel preaching, electro-acoustic sounds and much else as well. Each in its own way is a gem.

The music draws from modern and postmodern, quasi-rock and folk modes with the panache and elan you expect from Bang On A Can adventures. A good deal of funding from listeners and institutions went into making this project a reality, and a good thing it is. There is an accompanying DVD with several of the compositions and visual elements. I was not able to watch it but I imagine it enhances the package.

Either way this is music of differences, inspired and played with grace and thrust by the All Stars.

Posted by Grego Applegate Edwards at 4:49 AM

Email ThisBlogThis!Share to TwitterShare to FacebookShare to Pinterest
Labels: bang on a can all-stars field recordings gapplegate classical-modern review, modern and post-modern chamber music in the 21st century, music for prerecorded sound and chamber ensemble